This common but elegant perennial plant is found in many locations in the United Kingdom. An ancient native; it has been found in soil samples dating back as far as prehistoric times. It is most often seen in agricultural land, verges, lawns or even pops up uninvited in your flower border. Often overlooked or pulled out, it’s neat, narrow, spear shaped leaves are set in a beautiful rosette. From April to the first frosts they send up very neat green flowers. The flowers balance on fine stalks above the leaves and the composite heads first produce stigmas from the base upwards, followed by white dangling anthers protruding from the compact central flower head. Anthers then flower heads finally turn brownish. They are wind pollinated but also disperse by cloning. Once pollinated each individual floret can have up to two seeds and these can last in the soil for up to 10 years.

After flowering, the seed heads turn a rich brown and last well into the winter. These become part of a plentiful food source for native wildlife, including Goldfinches. 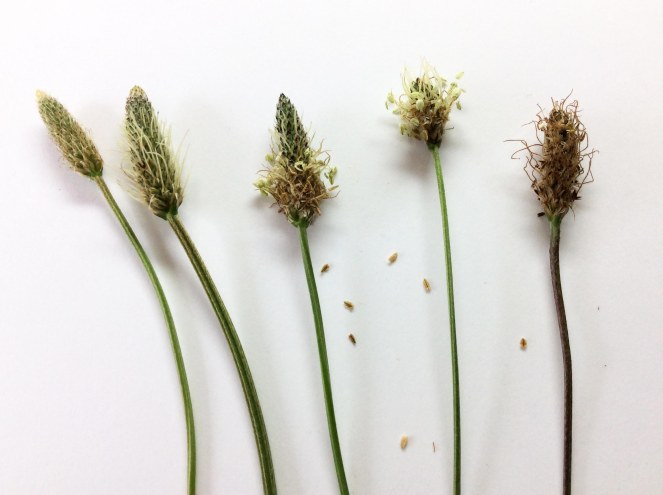 Miggie says that she chose this Plantain “because I have fond memories of the plant from when we were children.  We used to pull off a stalk, make a loop in the bottom end and fold it round so that the rest of the stalk ran through it and the head flew off to hit our friends – simple country fun!”

How many people have done this I wonder?

Although an easy plant to find it is challenging to paint. In conversation with Miggie she told me about her work and outlined her technique…

Miggie says that she learnt her craft with Jenny Jowett.  When starting a new piece she rarely sketches the plant in advance preferring to map out the composition in rough and then draw it carefully directly onto her art paper. She uses Arches NOT paper and draws with an F or an HB, she prefers the former as it will sharpen to a ‘wicked’ point and tends to be less messy than HB. Once drawn, any excess graphite is removed with a putty rubber.

Each plant is drawn carefully, as plants have a tendency to move whilst you are working on them and an inaccurate drawing will cause issues further on in the painting.

Once drawn any excess graphite is removed with a putty rubber at this stage she starts to add watercolour to the image.  Most of her paints of choice are Windsor and Newton Artists colours but also some Schmincke paints, her favourite of these being their French Ultramarine. Light fastness is of prime importance so she focuses a great deal on that for her palette choice. Brushes are key to both good washes and detail. The da Vinci, Series 11, Tobolski Kolinsky sable watercolour brush number 7 will do both a wash and a very fine line, holding sufficient paint for the whole length of a stem.

A recommended book is Michael Wilcox, Guide to the Finest Watercolour Paints. I think the culmination of her technique can be seen in her sensitive depiction of this common, familiar, overlooked, native.

Yesterday, whilst gardening, I came across a Plantain growing in my own flower border; it was surrounded by cornflowers and looked so elegant, it is staying.

Elaine Allison in conversation with