Having chosen to illustrate Yew, the first challenge was how to depict the species. I enjoy drawing trees in pen and ink, and so I decided the central focus would be a Yew tree.

Which Yew should I choose?

The 2500 year old Ankerwyke Yew grows just ten miles from where I live, and with its great hollow trunk is a fascinating tree to sketch. However, this exhibition is representing our native flora and so I decided that a more ‘typical’ Yew would be appropriate. In the end I chose a churchyard Yew growing on the opposite side of the river at Old Windsor. This tree is probably 500 to 1000 years old and has many of the characteristic growth habits of the species, including the way in which the trunk rots as old branches fall and then as the new shoots grow they send out roots which grow down through the spongy rotting wood to the ground below, thereby rejuvenating the tree, which probably partly explains why Yews live for so long. 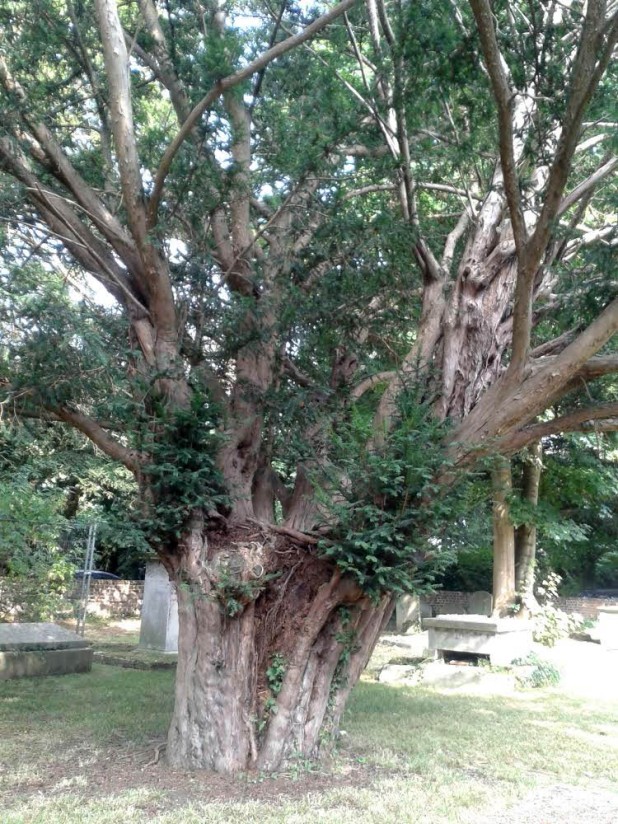 The Yew at Old Windsor

As I draw this Yew I am getting to know the tree – not just its shape and form, but also how it grows and rejuvenates, which makes me realise that Yew trees are probably the closest any living organism is to being immortal!

I shall leave the soft rotting part of the trunk until the end so that I can get a good contrast in texture between this part and the beautiful bark on the rest of the tree.

I made a life size sketch of Yew berries from this tree, and I think that I may put them under the branches of the tree on the right hand side. Could a miniature outline sketch of the Ankerwyke Yew go on the left hand side? I shall have to see if time and space allow.

My Yew drawing in progress.