I am very fortunate to be able to walk our dogs in the Russia Dock Woodland and adjacent  Stave Hill Ecology Park in Rotherhithe, London.  The  Woodland was created by the filling in of the former Russia Dock and Stave Dock, part of the Surrey Commercial Docks. Stave Hill is an artificial mound with viewing platform built in 1983.

The UK’s first urban ecology park, named for the 18th Century botanist William Curtis, was created on the site of a derelict lorry park near Tower Bridge, London in 1976. The land returned to the site owner, the London Docklands Development Corporation, in 1985, who provided 5.2 acres of land on the Rotherhithe Peninsula as a replacement. Stave Hill Ecology park provides open access to nature in the city. The plants here provide a home to many native birds, animals and invertebrates.

A few years ago I was drawn to a small, web covered, leafless tree by perhaps a hundred abseiling caterpillars.  A few months later the leaves had grown back, and small white moths could be seen flitting in the undergrowth.

The tree was a Spindle, Euonymus europaeus, and the moths Yponomeuta cagnagella, the Spindle Ermine. The caterpillars descending to pupate under leaf litter in May and emerging  as beautiful ermine clad adults in July.

The moths are usually only active at night, unless disturbed, and in July the female lays her oval, flattened eggs in groups of 20-50 on the branches of the host. She coats them in a protective secretion and several weeks later the first instar caterpillars hatch, feed briefly and settle down to overwinter beneath the egg mass.

The following year the caterpillars were less numerous, not all the leaves were eaten and crucially nor were the flowers. It was as if the tree was compensating for the previous year, and by October its branches were weighed down with magenta berries.

I followed the lifecycles of the moth and tree over the next three years, sketching at intervals, with the idea of illustrating them at some point. Therefore when I came to choose a native plant to paint for submission this Spindle was my obvious choice.

Euonymus species were named ‘Spindle’ as their dense hard wood was ideal for making the spindles used for the spinning of wool. This small tree is often found in hedgerows and can grow up to about 4m tall. The berries are poisonous and have been used for a number of medicinal purposes including the treatment of head lice.

I initially intended to include the moth’s lifecycle in the illustration, but deciding that perhaps most plant lovers aren’t as fond of caterpillars as I am, I have only depicted a small remnant of their silken webs.  Some gardeners will avoid spindle as it is also the overwinter host of the eggs of the black bean aphid, Aphis fabae.

I wanted to show internal details of the flowers and berries drawn under a microscope and having often worked on animal anatomy illustrations with a ‘ghosted’ approach rather than dissections, I decided to treat my spindle in the same way. 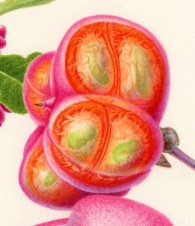 For many years I have been using Fabriano 5 watercolour paper, mainly for its whiteness, but like many others find the new surface unsuitable. Having experimented with a number of papers I have returned to Arches HP, on which I was originally taught watercolour painting.

For this illustration I have used  Daler Rowney FW Acrylic Artists Ink. When diluted it initially performs exactly like watercolour, but as it is waterproof, many transparent layers  can be painted without disturbing the previous ones.

I am writing this in January and now that the tree is bare I am looking forward to the spring and to seeing the caterpillars again, hoping that nature can maintain the balance of tree and host, and that there will be berries again this autumn.