Arabis Scabra  is a rare and endangered plant in this country and found only in the Avon Gorge, first recorded there in 1686 by John Ray. It is among several rare species in this area and the Curator of the University of Bristol Botanic Garden was keen to have these recorded.

Arabis scabra is a diminutive plant and grows only in a few areas within the Gorge, mainly rocky ledges and crevices. Often only a single plant and rarely in groups, it can be hard to spot and challenging to reach.

It usually involved climbing over the perimeter wire on the edge of the Downs and looking very careful for any signs of the plant while avoiding getting close to the cliff edge.

As it is an endangered plant it was not possible to collect specimens, with the exception of the rosette of leaves obtained ex situ. This meant observing, measuring, colour matching and drawing in situ, often in very uncomfortable positions. I did take some photos for reference out of necessity. 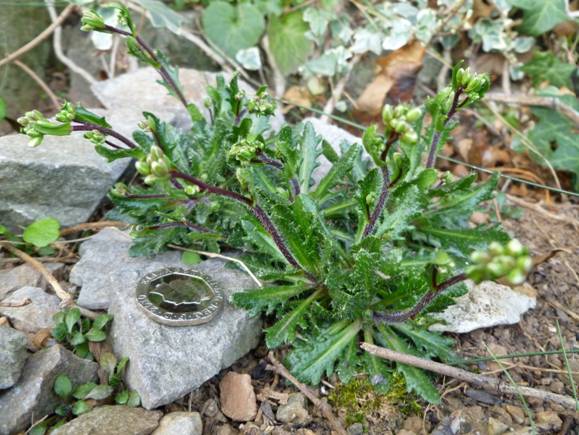 I used a 20p coin as an indication of size. I was a bit daunted by the minute size of the plant.  Never having attempted anything so small I decided it was best represented by doubling the size of the drawn image.  This made it easier to define the detail of the plant and to capture the charm of the delicate pink flushed buds, opening flowers and the hairy stems and leaves. I work in coloured pencil and find this works well with fine detail.

In creating the composition I wanted to produce a flow through the picture. As the plants tend to grow individually I tried to show them in various habitats across the page, in rock crevices, stony ground and mossy patches.

Being such diminutive plants they need to stand out from their surroundings which normally dwarf them. Using graphite for the background I hoped to give some of the detail of the environs without dominating the plant image. The life cycle is short, flowering and seeding in April and May, so buds, flowers and seed pods appear together.